Methanex Medicine Hat recently invested funds from products recycled during 2020 back into the local community.

Myndy Machan, environmental advisor, has a passion for finding opportunities to reuse, repurpose, or recycle the waste produced at site. Because of Myndy’s waste strategy, Methanex Medicine Hat was able to recycle 98 percent of the hazardous waste and 44 percent of the non-hazardous waste produced – most of it from the 2020 turnaround. The amount of waste recycled was equivalent to four Boeing 747s.

Using the funds collected through recycling, the site donated $10,000 to the Medicine Hat Fire Service to support an Attack™ Digital Fire Training System, an interactive system that simulates smoke and fire, is more environmentally friendly than traditional training methods, and reduces firefighter exposure to potential carcinogens.

Methanex has a strong partnership with the fire service, which is a testament to the work of Jason Linton, emergency services advisor. Methanex is a member of the South Eastern Alberta Training Group, which is made up of municipal and industrial emergency service providers in Medicine Hat and the surrounding area. The group shares resources and coordinates emergency response training. Jason is currently the group’s chair and helped develop the charter and mandate. Because of this partnership, Methanex will have access to the Attack™ Digital Fire Training System for free.

Medicine Hat is excited to expand its partnership with the Medicine Hat Fire Service by supporting an initiative that benefits the health of firefighters and the local environment. This sponsorship is also a testament to the community benefits of turnarounds and our site’s waste management strategy. 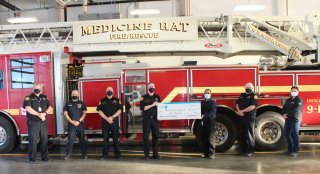