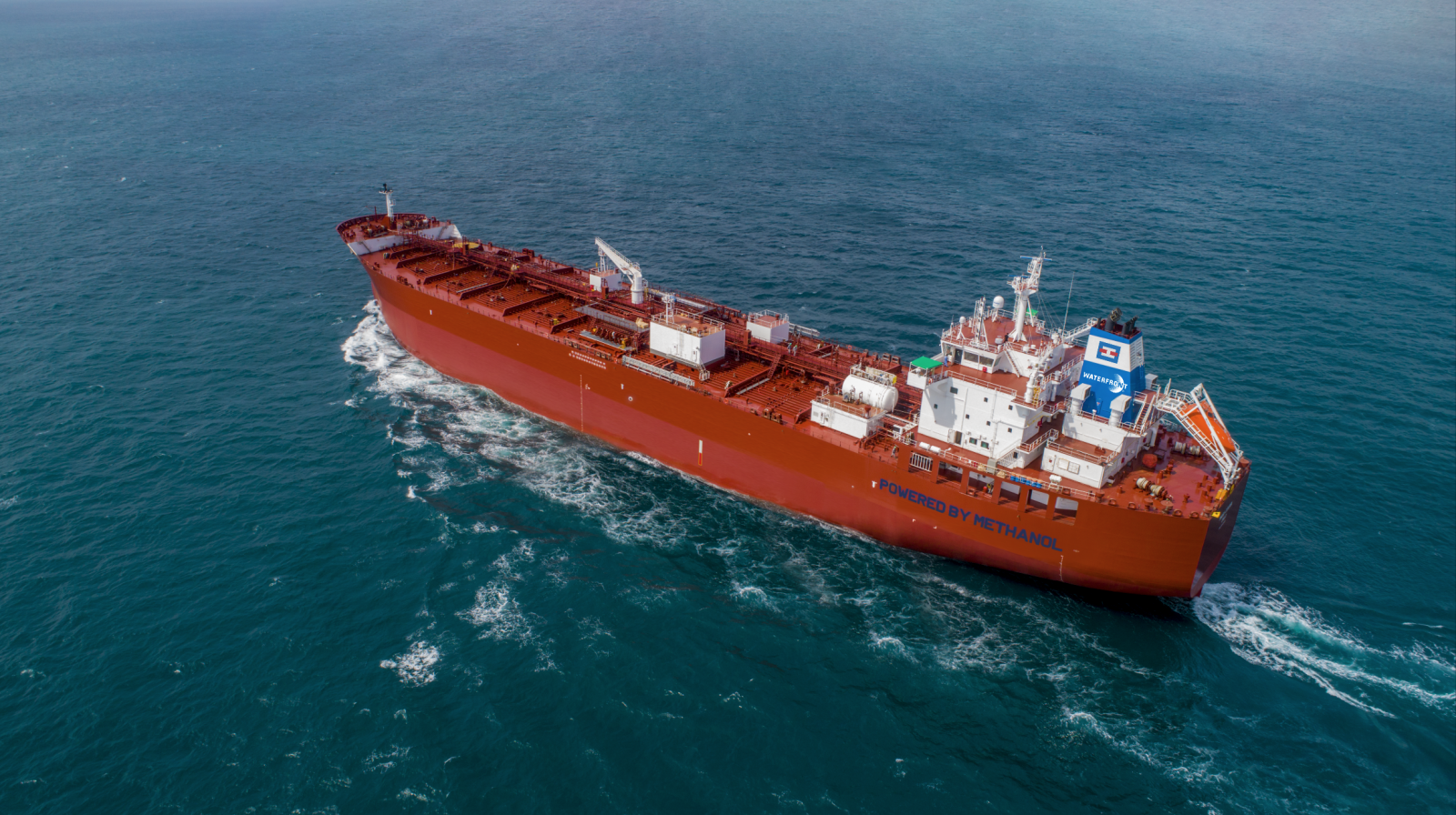 These 49,000 dwt vessels are built with the second generation of MAN B&W ME-LGIM two stroke dual-fuel engines that can run on both methanol and conventional marine fuels. The vessels join the seven existing methanol-fuelled vessels chartered by Waterfront Shipping that have received accolades from the marine industry for their use of methanol as an alternative fuel. These existing vessels have surpassed more than 50,000 operating hours running on methanol in compliance with IMO 2020 emissions regulations. The two new vessels – together with an additional two vessels that will be delivered to Waterfront Shipping by year-end – will have the ability to meet IMO Tier III emissions standards without the need for exhaust gas after treatment.

“We are very excited by the performance of our first seven methanol-fuelled vessels that have proven the safety and reliability of the technology. With this second generation of vessels, we will benefit from innovative technological advances that will continue to optimize performance and efficiency,” says Paul Hexter, President, Waterfront Shipping Ltd. “On an energy-equivalent basis, methanol is cost competitive over energy price cycles and we see significant value creation opportunities from using a methanol flex-fuel engine. We are proud that approximately 40 percent of our fleet will be powered by methanol-fuel technology by the end of the year.”

“Our first two methanol-powered ships were delivered in 2016, and each now has more than 10,000 successful running hours on methanol with no issues that have resulted in off-hire or idle time,” says Patrik Mossberg, Chairman, Marinvest. “It is important that we share our experiences and make the industry aware that methanol is a well-proven, simple-to-adopt solution offering compliance with IMO 2020 regulations and provides a pathway to meeting IMO 2030 and 2050 CO2 emission targets.”

Methanol is one of the world’s most widely traded chemicals and is available globally at major ports, providing a cost-effective solution to meet the needs of shipowners today. Safe, biodegradable and clean-burning, methanol is a marine fuel that can meet the most stringent environmental regulations. In addition to IMO 2020-compliant SOx emissions and the ability to meet Tier III NOx regulations without exhaust aftertreatment, methanol can also provide a pathway to meeting future carbon emission reduction targets when it is produced from renewable sources.

René Sejer Laursen, Promotion Manager at MAN Energy Solutions says: “We developed the ME-LGIM engine in response to interest from the shipping world in alternatives to heavy fuel oil. With the growing demand for cleaner marine fuels, methanol is a sulphur-free alternative that meets the industry’s increasingly stringent emission regulations. We are also very happy to collaborate once again with Methanex, whose vessels have showcased the benefits of operating on methanol and that meeting Tier III limits is possible through mixing methanol with water. Furthermore, a methanol-burning engine can enable the vessels to meet future greenhouse-gas emission standards as methanol can be produced in a carbon-neutral fashion from renewable sources. As such, the ME-LGI concept is mature technology and MAN Energy Solutions looks forward to exploring its many possibilities in the future.”

About Methanex Corporation
Methanex is a Vancouver-based, publicly traded company and is the world's largest producer and supplier of methanol to major international markets. Methanex shares are listed for trading on the Toronto Stock Exchange in Canada under the trading symbol "MX" and on the NASDAQ Global Market in the United States under the trading symbol "MEOH”. Methanex can be visited online at www.methanex.com.

About Marinvest/Skagerack Invest
Marinvest is a private shipping and investment group, part owners and managers of product and chemical tankers. Holdings include investments in tankers of about 80,000 dwt, chemical tankers between 20,000 to 50,000 dwt, a developing coastal shipping company and real estate. For more information, please visit www.marinvest.se.

About MAN Energy Solutions & the MG-LGIM Engine
MAN Energy Solutions developed the ME-LGIM dual-fuel engine for operation on methanol, heavy fuel oil (HFO), marine diesel oil (MDO) or marine gas oil (MGO). The engine is based on the company’s proven ME series, with approximately 5,000 engines in service, and works according to the diesel principle as methanol is a low-flashpoint, liquid fuel. When operating on methanol, the ME-LGI uses HFO, MDO or MGO as a pilot fuel, significantly reduces emissions of CO2, NOx and SOx, and does not have any methane slip. Additionally, any operational switch between methanol and other fuels is seamless. Tests on the engine, when running on methanol, have recorded the same or a slightly better efficiency compared to conventional HFO-burning engines. MAN developed the ME-LGI engine concept in response to interest from the shipping world to operate on alternatives to heavy fuel oil. Methanol carriers have operated at sea for many years. With a viable, convenient and economic fuel already on-board, exploiting a fraction of the cargo to power a vessel makes sense with another important factor being the benefit to the environment.
For more information, please visit https://marine.man-es.com/two-stroke/2-stroke-engines/me-lgim.